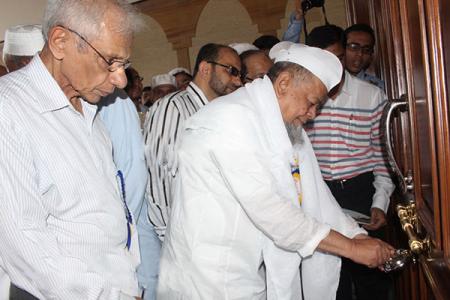 New building of Anjuman Degree College for Women donated by Ex-President and Patron of Anjuman, Mr. S M Syed Khalil was inaugurated and dedicated to the community on 22 August 2015.Maulana Mufti Mohammed Ashraf Ali Baqawi from Bangalore inaugurated the building in the morning. This was followed by a program conducted for women in the afternoon session and next day.

In afternoon session, many competitions were held for students including cooking competition for parents.

Next day, Dr. Farzana Mohtesham, Principal of Anjuman Pre- University College for Women, welcomed the audience and gave brief description of Anjuman. She started by thanking Mr S M Khalil for the beautiful college campus and went on to educate the audience on the history of Anjuman history which began with only 6 students and grew over the years having more than 20 institutions under its wings. She said that the alumni have accomplished great things and have made the institution proud across the country and even abroad. She added that Anjuman provides many courses like Teacher’s training in addition to the regular Arts, Commerce and Science streams. Miss Shabeena, lecturer of Psychology gave brief introduction of Mr. S M Syed Khalil throwing light on his education, professional career, awards and achievements.

Dr. Vijayalakshmi from KUD having specialization in psychology enlightened the audience by her beautiful thoughts on living a peaceful life with positive attitude. Miss Uzma Nahid who works for empowering women rights.

Miss Taliya, lecturer of English welcomed and introduced chief guest of the function Dr vijayalakshmi, lecturer of Psychology of KUD and Guest of Honour Miss Uzma Nahid, Executive director of Iqra Foundation and member of Personal Law board along with other dignitaries including Rasheed basha, former principal of Anjuman college for Women and Rabiya w/o late Usman master, (jubapu) teacher, foremost teacher of Anjuman, Seema Kasimji and Raeesa Shaikh.

Mr. S M khaleel also expressed his opinion On the importance of education among women narrating many hadeeth. Prizes were also distributed before the program concluded to the winners of cooking competition and various other competitions held. Noor Shameem, Assistant head mistress of one of the Anjuman wing concluded the session by giving vote of thanks. Noore Ashad, lecturer of Anjuman college compered the program while Ex principal of Anjuman Womens College Rashida Basha presided over the function.