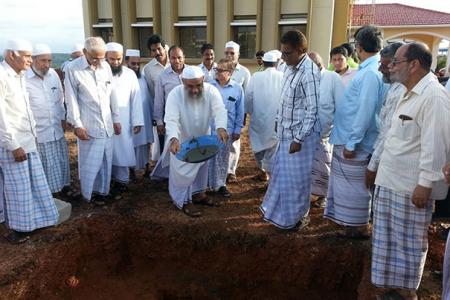 The foundation of Anjuman’s New Building of Anjuman Boys High School was laid today the 2nd November 2015 at Anjumanabad by the two Kazis Janab Mulla Iqbal and Janab Akrami Khaja at about 4.45 pm.

The new School building will be constructed at Anjuman Abad beside the recently completed Anjuman Jukaku Shamsuddin Memorial Administrative Block. Members of Anjuman Executive committee, including the President of Anjuman Jb. Jukaku Abdul Rahim, Vice President Jb. SM Syed Abdurrahman Batin and General Secretary Jb. Kasimji Ansar Saheb, other office bearers and prominent personalities of the community were present during the Dua ceremony. Moulana Bari made the Dua after concrete was poured in the pit by the dignitaries present.

The construction cost is estimated to be about Rs. 3.25 crores and has been awarded to M/S KNZ infra after following prescribed procedures of Anjuman and after the Works sub-committee members inspected and was satisfied with the quality of works at the construction sites of the Contractor at Bhatkal and Bangalore.

Anjuman requests all it’s members to support this new project by coming forward to fund for this essential project. This new building will ensure quality school education to Anjuman students with nice ambience and all modern facilities like seminar hall, good library, laboratory and other amenities.The construction of the new building of Anjuman Boys School was a long felt need as the School is being run in a temporary premises in Anjuman Abad in the basement of the Anjuman Mosque. The building is likely to be completed in about two year’s time.