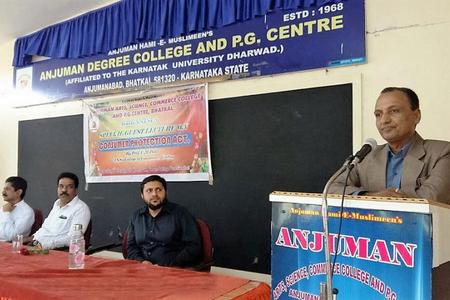 A special lecture on ‘Consumer Protection Act’ was held at Anjuman Degree College and PG center, Bhatkal on Sunday 28th February 2016. Speaker of the function, Professor C.M. Patil, ASS College of Commerce, Gadag interacted with the students and enlightened them as to how consumer law can be used more effectively to give justice to consumers.

“Though the Consumer Protection Act was formed in 1986, there are still certain difficulties in its complete implementation. However, the organized movement in the past helped in forming the Act which came into force only in 1989,” he explained.

The function began with the recitation of Holy Quraan by Abdul Muqsit, Naufal Mohtesham welcome the gathering, Prof Ganim Mohtesham gave a brief introduction of the guest and Jasim Fakardey delivered vote of thanks.