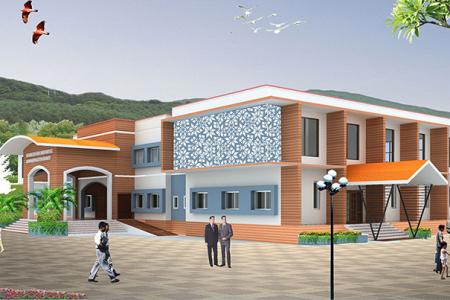 Anjuman is pleased to announce that the work of constructing the Anjuman Jukaku Shamsuddin Memorial Administrative Block has been started with Dua and ground breaking formality on 28th July at 3 P.M. The work has been awarded to the Contractor and it is expected to complete in about one and half to two years period. The Anjuman Administrative Block will be constructed in Anjuman Abad between the Anjuman Degree College and P.G. Centre Library building and the UGC Hostel at the entrance to Anjumanabad.

The progress of the work was reviewed in the site meeting held on 13th November 2013 at the work site by General Secretary Jukaku Abdul Rahim along with Anjuman Secretary of Works Committee S.M. Syed Abdul Kader, S.M. Syed Parvez Member of Works Committee, the Architect Mr. Muzammil, Resident Engineer Mr.Nagendra, Head of Civil Engineering at Anjuman Institute of Technology and Management  Prof. Phalachandra and Contractor Thomas.

The project has been sponsored by family of Late Janab Jukaku Shamsuddin Saheb, the revered leader of Karnataka, and former Deputy Minister of Finance, Government of Karnataka. He also served as General Secretary Anjuman Hami-e-Muslimeen. As a fitting memory to his sincere services to Anjuman and to Bhatkal and karnataka muslims, the administrative block is named as Anjuman Jukaku Shamsuddin Memorial Administrative Block by Anjuman executive.

The estimated cost is more than about two crores.  It is planned that this block can take care of Anjuman Head office for the projected future requirement of at least thirty to forty years. The Administrative building will have offices for administrative staff, Senior Anjuman Managers and Anjuman office bearers. It will house three conference halls,  one for office bearers meetings and committee meetings, one for Executive Committee meeting and one for General body meeting.