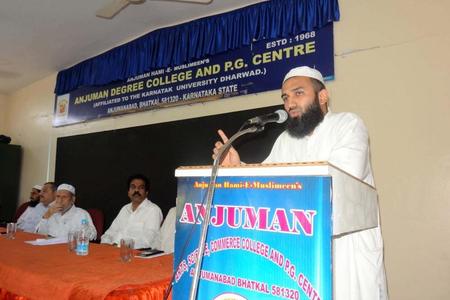 Condolence meet on the demise of the legendary Islamic scholar of Bhatkal Maulana Abdul Bari Nadvi was held in Anjuman Degree College in Bhatkal on Sunday. Maulana Abdul Noor Mufti, son of Maulana Abdul Bari Nadvi in his speech said that everyone who enters the world has to depart someday. In his lifetime he has conveyed many important lessons. Among them was praying regularly and consistently, kindness to one and all, taking part in sports within Islamic shariah. Spreading Islam was one of his main objectives which should be adopted by one and all.

Maulana Hashim SM Nadvi, Brother in Law of Maulana Abdul Bari recalled his daily routine and said that youths should adopt Islamic way and lead a simple life. He said that Maulana on his death bed said that this world is nothing but a place soon to be destroyed, all that matters is the life of hereafter. He also said that Maulana had always concerned with the spreading of Islam even during his death bed, he invited the staffs of the hospital to embrace Islam.

Younus Kazia business tycoon, AM Mulla Principal of Anjuman Degree College, Mushtaq Sheikh Vice Principal amongst others were present on the dais.